Following the highly successful ‘Reflections – 200 Years of Womens’ Fashion’ in 2015, the Society’s Textile Curators have put together a delightful display of children’s and baby’s wear.

Opening on Mother’s Day on display will be exquisite christening gowns, beautiful handmade dresses, baby’s garments and more. The earliest is a cotton christening gown from c1805, with rows of pintucks and lace and it’s a real picture. Also included are a christening gown worn by six children born to Jane and John Edwards who lived at Perthville. John Edwards came out from England and was a butcher in Bathurst but in 1874 he built the Bridge Hotel at Perthville, and also owned the general store and the blacksmith’s shop. Another christening gown was worn by Lorna Webb (1902 – 1972) who was Edmund and Selina Webb’s granddaughter.

Also included in the display are a range of baby’s clothes – petticoats, little leather shoes, silk rompers, bonnets and booties. The boys weren’t forgotten either with a pair of cotton dungarees showing signs of a long life – the knees were completely worn through! 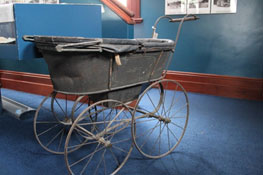 The display also features early diapers - in the early part of the 20th Century, cloth users were boiling diapers as they became aware of bacteria. The first disposable pad was made of unbleached creped cellulose tissue (held in rubber pants) in 1942 by Paulistr in Sweden. A few years later in 1946, an American housewife named Marion Donovan invented the ‘Boater’ – a waterproof covering for cloth diapers. Her first model of the disposal diaper was a conventional cloth diaper inserted into a plastic shower curtain. Marion was granted four patents for her designs, including the use of plastic snaps that replaced the traditional and often dangerous safety pins.

A turn of the century folding high chair has been lent for the display – it has wheels to allow it to be propelled around the room by the incumbent infant. A scooter and a Cyclops rocker horse are also on display, and a pram (pictured) thought to have been manufactured between 1850 and 1910. Anecdotal evidence suggests that it may have been purchased from Webb & Co, General Merchants, Bathurst. We have no more information about this model – can you add any more detail?

Come and be delighted by this wonderful display from the Society’s textile collection, it runs from 8th – 15th May 2016.