One of the main features of Machattie Park is the "Band Pavilion", also referred to as the "Band Rotunda" or "Band Stand". This photo was taken by Mr. C.J. Beavis, photographer of George Street, in 1903.

Definitely one Bathurstian who was very keen, if not one of the keenest, on having the land that once housed a very large gaol turned into an established laid out park was Doctor Thomas Machattie. Thus when the reserve was named 'Machattie Park' after his father, Doctor Richard Machattie, it must have been a great family honour at the time in 1889.

Dr. Richard Machattie, a Scotsman, trained at the Royal College of Surgeons in Edinburgh before sailing to Sydney. He later travelled up to Bathurst in 1839. He was one of the aldermen elected in 1863 to the first Bathurst Municipal Council. Dr. Machattie served three terms as Mayor, these being in 1871, 1872 and 1873. He died in early October 1876 and some fourteen years later his son, Dr. Thomas Machattie, had to abstain from voting on the name of the proposed park at the Bathurst City Council meeting.

The initial plans for the new park were submitted in a competition run by the Bathurst City Council and won by Mr. Hine, a local Bathurst architect. On his plan he had the ornate octagonal band rotunda drawn in another section of the proposed park, not central to the changed design where all paths lead into this structure. Mr. Hine described it as "an elevated and picturesque band pavilion to be covered in French tiles."

In April 1890 Mr. Alfred Patterson, originally Head Gardener for Orange's Cook Park, was announced as the new Head Gardener for the Bathurst City Council on a wage of £2-10-0 per week. Mr. Patterson took the project to heart and soon had the area closed to the public for about four months. This enabled the project to be laid out without onlookers getting in the way, the holes filled in and roadways constructed ready for the official opening on 20th November, 1890. This occasion was well reported in The National Advocate newspaper. Some 1,000 people attended with local school cadets formed up at the entrances as an honour guard. The Mayor, Alderman P.V. Ryan carried out the formalities a little after 4pm and told those assembled that their new park had cost just over £3,174.

The park was funded from a number of different sources with the Bathurst City Council assisted by the Bathurst Progress Association. Money up to £1,000 had been promised by the New South Wales Government as long as it was matched by money raised by Bathurstians.

The Bathurst Progress Association donated £50 towards the band pavilion however before long there was some concern as the Council failed to call tenders for the building. Mr. Hines felt that it would cost £100 to £120. The rotunda went ahead soon after and had a timber floor. The whole idea and finished structure pleased Mr. Sam Lewin, Bandmaster of the Bathurst District Band, who would be putting it to good use conducting the band members.

The rotunda had a wide flower bed built around it and within a decade the railings were covered in greenery and flowers in season. Elm hedges, a tree popular in England, used over there to line narrow country roads or boundaries around fields and farms, were planted around the path that surrounded the rotunda.

When the Grand Fountain, erroneously called the Crago Fountain, was opened on Christmas Eve 1891 the rotunda was filled with chairs for the official party of Councilors, members of Parliament, Bathurst Progress Association and their wives. 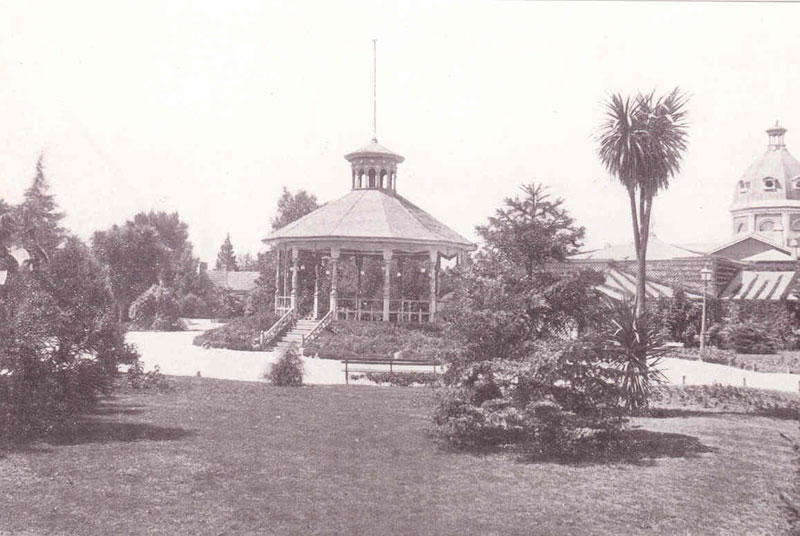