It is surprising the number of times where one or more of Bathurst's doctors in the 1800s and early 1900s were responsible for suggesting ideas for local projects such as parks and memorial drives.

It was during the last decade of the reign of Queen Victoria that this magnificent park in Bathurst was created for people at the time and future generations like us today.  The eight acre park itself was named after Dr Richard Machattie and the feature in today's photo, the 'duck pond' after Dr William Walter Spencer.  The duck pond, or more correctly 'Lake Spencer', has from the time it was completed, nearly 120 years ago, been a popular location, especially with children. 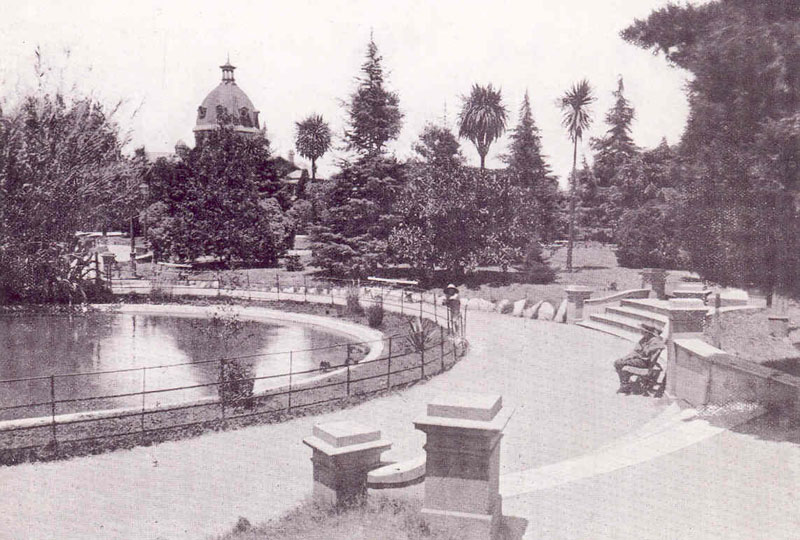 On early town maps of Bathurst the block of land surrounded by William, Keppel, George and Russell Streets was designated as land for "public use" when the Assistant Surveyor arrived to lay out Bathurst.  Mr. James Richards arrived to finally, and officially, survey the western side of the Macquarie River so that blocks of land could be purchased and such land for schools, churches, parks and reserves could be set aside.  It was 1832 and blocks of land went on sale the following year.  Fortunately 'Section 6' was land reserved that would be primarily used for Machattie Park.

Prior to 1890 when the project began, part of this block had been used for Bathurst's 'second gaol'.  The gaol was constructed in the late 1830s however by the 1870s locals were not that impressed by it being 'in the middle of town.'   It would take almost a decade for the Bathurst Council and other locals to convince the Colony of New South Wales Government to remove it. It seems that the offer of suitable land on the Town Common, some ten acres in size, for another gaol to be constructed helped Government officials make up their mind.

The Bathurst Free Press and the Bathurst Daily Times cover the progress of our Victorian era park in quite some detail and it was the Editor of the Bathurst Free Press who was none too pleased that the park was to be originally called "Dalley Park."  Initially it was named by the Bathurst Council after a man who had died in the mid 1860s. Then it seems some of the local councillors did a back flip after the newspaper was printed as well as a large group of ratepayers attending the following council meeting.  In a vote 5 to 4 with Dr Richard Machattie's son Thomas, who was on council at the time abstaining from the vote, the name was changed to Machattie Park.

Both Dr Machattie and Dr Spencer even offered their own money, on loan of course, to Bathurst Council so work could begin immediately.  Dr Spencer had served as a Bathurst Council Alderman for some six years as well as being Mayor in 1884, the latter being only eight years after he arrived in Bathurst to take up his practice.  Costings were done and the NSW Government offered £1,000 if the community could raise a similar amount which they managed to do.  The cost of the 'pond' was estimated at £300.

Under the control of the Head Gardiner Mr. A.A. Patterson the pond was constructed by pick and shovel along with a horse and cart owned by Mr. B. Henderson.  The latter also helped with other areas of the park. The hole was constructed in the shape of a back to front 'S' and lined with crushed granite obtained from the crusher at Kelso. Coarse river gravel and cement was applied at some time also.  It took some forty loads of granite to complete the job afterwhich turf was laid around the edge allowing Mr. Patterson to report to the Council meeting in November of 1890 that the 'lake' was complete. The soil removed from the hole was placed in nominated and desired areas in the park.

It must have been an honour for Dr Spencer to have this feature named after him and he attended various openings as each park feature was completed. He also assisted with plantings in the park.  Unfortunately his association with the planning and the park stopped when he died in 1893.

A metal fence was also placed around the pond which soon attracted ducks and swans that normally used the Macquarie River. When pelicans and other seabirds arrived, such as seagulls, and it was suggested that some form of shelter should be constructed.  The idea was conveyed to Council several months after the pond was completed and resulted in the construction of two small low buildings.

Lake Spencer undergoes a cleanout on a fairly regular basis and has only recently been drained and cleaned.  Over the years it has given up some unusual items especially during cleaning such as a set of dentures, bicycles, tools, coins, purses, wallets, credit cards, toys, and more latterly mobile phones to name a few.

For those who are observant there is a plaque (which has recently been cleaned) attached to a rock acknowledging Dr Spencer's involvement which reads "This Lake records the services of Dr. W.W. Spencer – A good citizen and one of the founders of Machattie Park."

Lake Spencer still remains extremely popular, especially with smaller children who love to feed the ducks with their bread.